Some ideas hang around in notebooks for years waiting for their moment in the sun. Some ideas are born and then despatched immediately into the fray. The thoughts and fancies that lay behind Stuart and Kate were actually a rather awkward combination of the two.

For ages I had a silly bit of dialogue written in a notebook where two characters debate a upcoming trip to an art gallery. The fictional exhibition was of the work of Pieter Bruegel the Elder (which I can never spell – I have just had to look it up for about the thirtieth time) and went something like this:

By rights this “gem” should have stayed buried in the notebook but when Jimmy started talking about making a short based on a relationship then these words were rescued from obscurity and found their way, almost verbatim, into the script that became Stuart and Kate.

You can see the finished film here. We are pretty proud of it.

This film very quickly became our biggest project to date. Our actors were not our mates (or our Dads) but actual, you know, actors. We spent a long time drafting and redrafting the short script and, as ever, Jimmy did an excellent job in reigning in my more ponderous excesses. Like many, many writers I wanted to be Aaron Sorkin during his West Wing pomp but Jimmy was right to patiently point out that what was so right for Josh and CJ was not going to work for an awkward British love story. Even if I could write as well as Aaron Sorkin. Which I can’t. So let’s move on.

This was another of those stories with some sort of “concept” lurking behind the narrative. I am overly fond of such constructions – I am well aware that they can seem showy and smug plus of course they can turn quickly turn on you and make you look like a dick when they don’t work. However, I think short films can be enhanced with a moment of “ah-ha!” at the climax and Stuart and Kate seemed like a script where this could really work.

The original title was “Headspace” which gives more of a clue as to the trick at the story’s centre and we hoped that our audience would all slap themselves in disbelief and wonder at the metaphorical rug-pulling when they realised that KATE DOES NOT EXIST. She exists only in the tube scene and then is only ever in Stuart’s head for the remainder of the film.

Many, many people have watched Stuart and Kate. And many have asked us about the ending. And many many said “oh right!” loudly when we told them what we’d intended. This suggests that we did not get it quite right. This is a shame, clearly.

A decent wide-angle lens would have helped our storytelling significantly. If we could have seen Stuart in the final shot properly isolated in the empty space then perhaps people would have realised that items from the room had been disappearing from the very first scene. It would have also made the cut from the close-up on Kate to that on Stuart all the more effective. Effective and thusly negating the need to reveal the idea behind the film in block capital letters further up this page.

We are really pleased with Stuart and Kate. We had so much fun making it. And we are delighted that so many people have seen it. And enjoyed it. And, lest I forget, I GOT TO ACT IN THE BOOKSHOP SCENE. Surely any competent critic’s highlight.

Let me also give a quick word about my old pal Al Boley’s brilliant song “Up To Me” that we commissioned for the film. It is ace. And Al is very talented and having spent many years writing and performing with him about a decade ago it was superb to have a reason to collaborate again. You can see a film of us recording the song here.

Oh yes, you can also see Stuart and Kate with French subtitles if you wish or indeed if you need them. Although it is unlikely if you did need them that you’d have made it this far through my meandering and imprecise English. But thank you to my lovely (and French) wife for all her hard work on this.

To continue the story  – such as it is.

Jimmy and I returned to London from shooting Sliced and a few days writing and then shooting what would eventually become Jesse – our entry in a one minute film competition.

This was a lot of jolly fun, especially as we were working with our good friend Rupert Waring. This (very) short tells the story of a man writing to a partner asking for some time and space to clear his head. The first draft of the script was my usual verbose and hyperbolic stuff but Jimmy stripped out all the nonsense and we were left with something tight and affecting.

The irony of the film is that our protagonist is mistaken and far from escaping the modern world of noise and electronic fluff, he is in reality submerged in a digital context but one that is unseen. So far, so much bad sixth form poetry. However we succeeded in achieving something of note with the film by using (I think) nine different cameras on the shoot, to give the impression of multiple pairs of eyes staring at our hero as he writes. This made it a bit of a sod to edit but it looks interesting.

Again we ballsed the sound up – even though we were simply recording a voiceover – so please don’t listen to it through headphones. However, the more I watch Jesse the more I like its distant and distracted tone; I don’t think that the “point” such as it was, comes across particularly clearly but for all that I think it is a decent piece of work.

And Rupert is great in it.

To finish the story, the competition for which it was entered folded before the closing date and Jesse was put out to grass on our Vimeo page where it was largely ignored.

Just under two years ago, Jimmy Hay and I decided that we’d have a bash at making some films.

Jimmy has watched more films that most people would think sensible and many of these are the kind of awkward, arcane stuff a million miles from a Saturday night film with your lover and a bottle of wine. On this theme, I asked Jimmy for a recommendation earlier this year, something easy of the eye and on the brain, something I could sip a glass of red in front of and escape the rigours of the previous week. Jimmy suggested “The Skin I Live In” and thus the word “vaginoplasty” became an unexpected part of Saturday night. Not something you get on Strictly Come Dancing.

Anyway, Jimmy likes films and I like writing stories. I have written extensively for over a decade now and some of what I have done is not altogether terrible. I won a couple of awards for playwriting a few years ago and have been lucky enough to have various things on stage in various places. So it seemed like a fairly reasonable idea to combine our interests and begin to plan for a long, rewarding and glamorous career in the film industry. How hard could it be?

And so, Long Arm Films was born.

The name was chosen without too much thought. It was taken from a musical that I wrote a few years ago, and on which Jimmy did some sterling production work. “Moon on a Stick” is a musical about a intergalactic fast food company and the attempts of its head of research and development to escape a life of alien patties and slimy thick-shakes made with real slime. (As someone said at the time, “it is the best sci-fi / fast food cross-over comedy musical that I have seen all year”. High praise indeed). Anyway, one of the endangered races featured in the show is the imaginatively named “long armed aliens” who, as you will be shocked to learn, have very long arms. And are green. They were one of the hit moments of the show and as such their name seemed like a good one to choose for our new adventures. In the future I might also claim an allusion to the 1956 Ealing film “The Long Arm” – I live in Ealing and I once wrote a show (another musical with the same team as Moon on a Stick – the brilliant Rupert Waring and Andy Fisher) set in Ealing Studios.

So we got a few quid together, borrowed some equipment, booked some actors, one of whom was my father – willing, cheap and a good actor – decamped to our homeland in rural Devon and made “Sliced” – a short film based on a play that I’d written several years earlier.

Neither of us had made a film before. Actually, that’s not quite true, I had made some bits and pieces during my Media Studies A Level course in the 90s and Jimmy had recently trumped this by making a documentary in Gambia. But in terms of narrative filmmaking neither of us really knew anything and we made numerous, calamitous mistakes. Who needs a sound recordist anyway? We can just hang the kit in the ceiling and press record during each take. Easy.

Actually no. Not easy at all. In fact really, really difficult.

It is funny to think back to this shoot now. Without wanting to show off, Jimmy and I are not stupid. By some measures we are pretty smart but not for a moment did we think that making narrative cinema (and I use this term with a hefty dollop of irony) might be harder than turning up with some kit, actors and a notebook and getting on with it.

We “saved’ Sliced in the edit and we released it to the internet where it was greeted with general indifference.

You can see Sliced below.

Looking back now, I am pleased with it. It is too much like a play, largely because it is a play that we stuck a camera in front of, but there are some great moments and Jimmy’s photography is often excellent.

And it was a start and to quote The Commitments – when you’ve made a start the rest becomes inevitable. More of this anon. 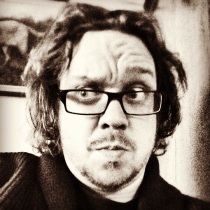 This is my face. You won’t be seeing it again.